If your disk is full, and your website goes down, don’t panic!  There’s always a solution!

If you’ve ever complained about that, it’s likely one of two things has happened, as described below.

It’s easy to forget how much disk space it takes to run a full server with all the bells and whistles.  Unless you use software like cPanel, you’d never receive any notification from the server that your disk is almost full.  When you login to your server and run df -h, you see:

Where did all the space go?  Lucky for us it’s easy to find out!

If you’re running Debian, Ubuntu, or CentOS, then you can install a package called ncdu which is an ncurses version of the du command (which calculates file and folder size)

For Debian and Ubuntu:

Once it’s installed, then run the following command to get an overview of what files are taking up space on the / partition (or actually any partition by name):

This will show you a graph, sorted by largest size, with the folder name in the rightmost column as shown below.  The -x option tells ncdu not to calculate files or folders that cross filesystem boundaries (e.g. files on /var if it were on it’s own partition).  I didn’t actually have a full server, but this screenshot should show you what it looks like: 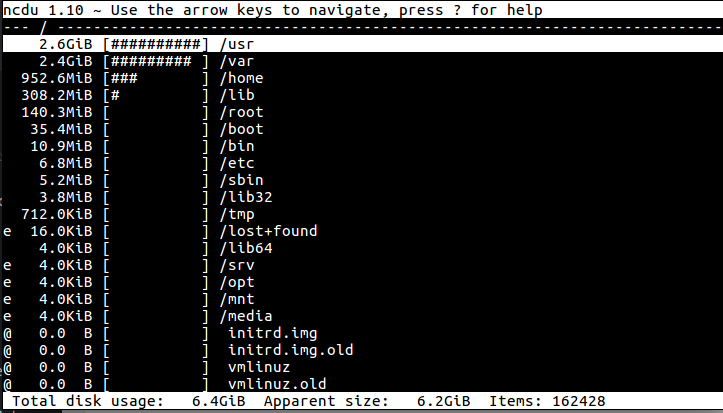 Pressing Shift+C will add a column between the size and the percentage bar, indicating the number of child items.  Screenshot below: 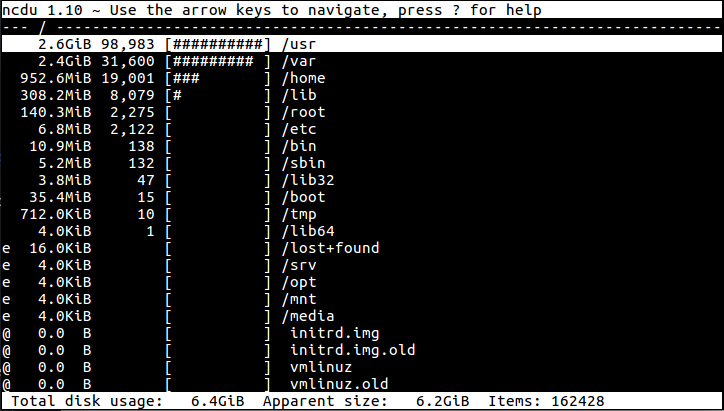 If you’re having the same issue, but when you go to your server to df -h, it shows plenty of space available, then you have a slightly different problem.  Chances are you’ve filled the inode table so it can no longer add any references.  An inode is a reference to a file, folder, symbolic link, character device, or socket file.

For this you have to use a different df flag, namely:

This will show you a little different output than the command from the previous section:

In this case, we’d run the same command as before, but this time make use of Shift+C to turn on child counts for directories.  This will also sort the list in descending numeric order for you, so the directories with the most inode counts float to the top.  Drill down a few directories until you see few numbers that are high and most that are low, and you’ll have found the culprit.  What to do with those files is up to you at that point!